Anni Albers "Variations on a Theme" 1958

Anita Bracalente lives a broad and varied artistic life. She is an art museum registrar, painter, sculptor, stain-glass maker, landscape designer, knitter and an arts lecturer. As she says, “a creative life takes on its own natural progression and direction.” An important aspect of this forward motion has been seeking light, creating space in a three-dimensional world and exploring time as produced by the seasonal changes of light and color. 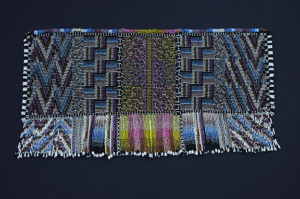 Bracalente grew up with an engineer father and seamstress mother. The family moved frequently following her father’s career path. She enjoyed spending time with her mother and remembers painting Jack Be Nimble as a four year old knowing then she was drawn to the visual world. She studied painting at the Indiana University Bloomington and painted for many years while working in collections management as the registrar or archivist at the IU Sidney and Lois Eskenazi Museum of Art. 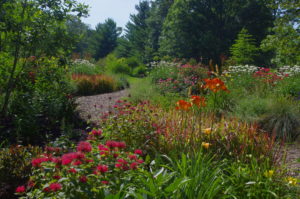 Combining her art and profession has been a perfect fit for Bracalente as it offers the opportunity to see and study artifacts from all over the world and to learn about art through the ages very intimately. As she said, “this professional career served me well,” “brought something to me as an artist…. a moving thing to have.” 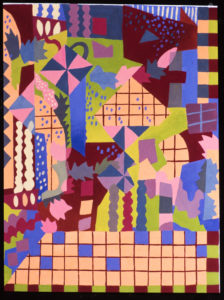 After painting for twenty-five years, Bracalente came to an impasse when she realized her paintings were “hard to decipher” and no longer “in touch with people.” She gravitated to sculpture and relished its tactile, grounding and three-dimensional properties. Her interest in three dimensions expanded to the natural world as she became interested in landscape history and design. Here Bracalente discovered she loved making space. 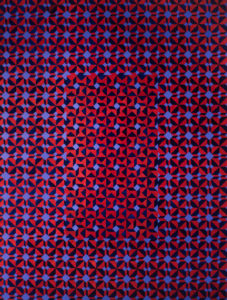 Never letting go of painting completely, Bracalente made a series of twelve pieces exploring the reflection of stained glass in paintings.
She loved the three dimensionality of light moving through glass and “watching the theater [of color] though the passage of time.” She is thrilled by the way physical space changes with light. 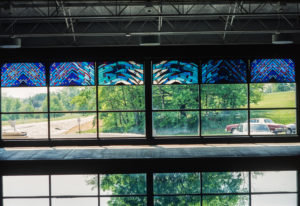 Seeking light and making space became focal points for Bracalente’s art in the garden. The aspects of landscape design that required attention to light, the color of the Midwest land and the way to manipulate these three dimensions to create space, direct the eye and set a mood, fascinate her.

All the while, Bracalante nurtured her love of textiles and fiber arts. Her mother was a skilled seamstress and her grandmothers were both sewists and needle-workers. Her father’s parents were tailors in Atlantic City, New Jersey. 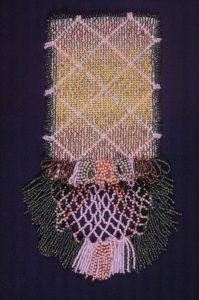 In her art collection of ethnographic textiles and fiber are beaded Victorian handbags. One day Bracalente noticed Suzanne Halverson in Bloomington, Indiana was offering a class at Yarns Unlimited about bead knitting Victorian purses. 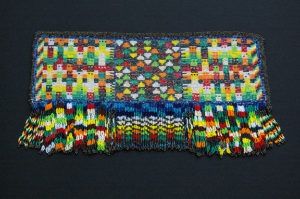 She learned the skills quickly and, one day brought a bag from her collection to class. Entranced by the patterns that seemed too complicated to recreate, Bracalente was determined to learn. She decided, “I am not doing this in one color. I am going to make an “evening bag,” a landscape at sunset, with beads and threads.” In order to make the multicolored beads fulfill her vision, she realized the beads had to be threaded backwards. Bracalente was off and running, creating in miniature the artwork she explored as a painter, sculptor, and landscape designer. The beads were like stained glass capturing the light. The cloth created the land for the exploration of space in the three-dimensional world.

Bracalente made fetish one-sided items, which came to the attention of the Missouri Fiber Artists. They invited her to join their group and participate in the 2009 bi-annual exhibit Innovations in Textiles. It occurred to her then that she might take herself more seriously after her work was compared to that of Diane Itter, a fiber artist from Bloomington, Illinois who died in 1989.

Anita Bracalante is a visual artist compelled to explore the ideas of light, space, three dimensions and time in many artistic media. She comes back again and again to the Midwest landscape and its quality of light and form as she knits her beautifully beaded pieces.