Lena Klett is a current MFA candidate in Arizona State University’s Fibers Program, and recently completed her first year of graduate school. I first met Lena at Anderson Ranch Art Center this past summer during a workshop, right before she was about to begin graduate school. Thankfully, we’vel kept in touch, and I was curious as to what she had accomplished in her first year at ASU. 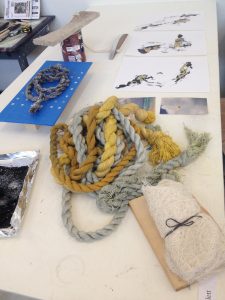 What made you decide to go to grad school / what are you hoping to get from the experience?

I’ve always wanted to go to graduate school—maybe it’s because both my parents have been teachers at any given point in my life, but I’ve always loved school. Having a two year gap between undergrad and grad was harder than I thought, and felt long enough so I was really ready to be back in the school environment and community. I wanted to further develop my art practice, meet new people, and learn as much as I can from everyone and everything around me, I also hope to get teaching experience.

I chose ASU because it had a lot of elements I thought were really positive. Some of them being: the size of the school; there are two professors who I really wanted to work with—Erika Lynne Hanson and Angela Ellsworth; it’s a three-year interdisciplinary program with teaching opportunities. I also wanted to stay in the southwest—particularly in the Sonoran Desert region. 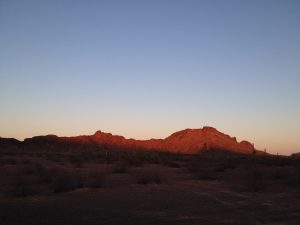 Photo of the Sonoran Desert by Lena Klett

Can you give a brief background of what you were doing before grad school?

After undergrad, I decided to leave Kansas City because I felt like it wasn’t the right place for me to stay, so I moved back to Phoenix (where I grew up)—which I thought was definitely going to be more of a temporary move then it turned out to be. I started working at the Lisa Sette Gallery—first cataloguing works by Luis Gonzalez Palma, and later taking on more preparator roles, which is the job that I currently have. During this time, I was also making work—mainly small drawings, and I had a show at Halt Gallery, which was in a little shipping container in Phoenix. 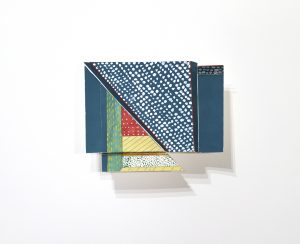 Have you already noticed a change in your artistic practice, if so what changes?

I’ve been trying to mix up how I think about the materials I’m using, and trying to use new materials and methods of exploring ideas. Last semester I started working with ice, as a material that changes (melts) and structurally undermines other objects/sculptural components. The works I made with ice are different for me (in concept) from the rest of my work, but I want to keep working with, at least on the side, it because it’s hard to control so it makes me think about my expectations for my work differently. 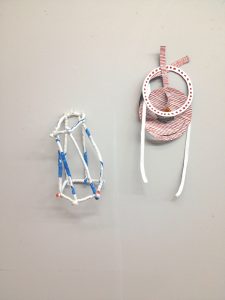 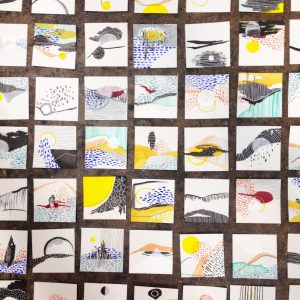 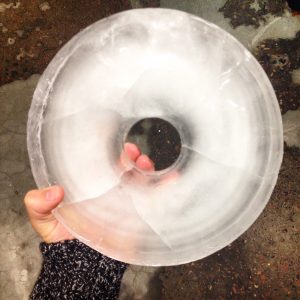 What are the different ways you’re working / various concepts and ideas you’re exploring?

My practice revolves around thinking about place, and perception of place. I’m taking this really great geography class, and it’s giving me all of this information on how people sense and talk about place. My work is about perceptions of place, but getting more specific than that is a little bit messy right now because I feel like there are so many things about place that interest me. One thing I can say is I’m exploring the more atmospheric, theoretical aspects of place—how our associations with past events and objects shape our understanding of what a place is or what it means. 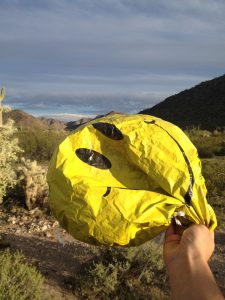 Found trash in the desert

Yes, more or less. It’s definitely more emotionally driven than something like straight up scientific geographical mapping. I’m working with ideas about how memories develop, but even more than that, I’m interested in how our memories construct our current perceptions of place—so how the way that we are shapes how we see and interact with objects, spaces, and people.

I just finished reading an article that discussed nostalgia in terms of sensing place, and which described the term as a painful and physical longing for home. I’m not sure how I feel about the argument that nostalgia is always painful, but I think there’s something important there in exploring how memory informs our current ability to sense place. 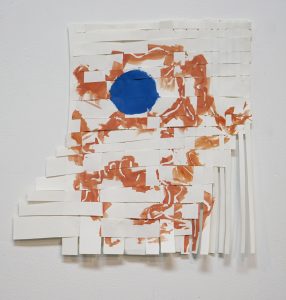 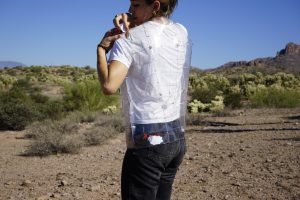 Favorited techniques and materials to work in and why?

I love drawing (any implement), and painting using gouache—the color, texture, and patterns these things allow. I’m trying to like other paint also, but it’s a slow, and usually disappointing process. I gravitate towards flat mediums, and right now I’m trying to figure out why. Maybe it’s something to do with trying to flatten and rationalize space in my head? 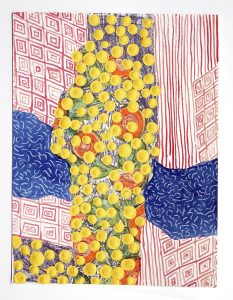 Is there anything you’re thinking of trying in the upcoming future that you’re excited about?

I’m excited to work more with the ice! I’ve been using the ice as a structural component that, as it melts, causes the structure collapses. For example, I’ve used the ice as a shelf to support a teacup, and as rings that hold together a rope net. It’s mostly about the process of the structure disintegrating—I’m less interested in looking at the beginning and the end, although both are obviously integral to understanding the middle. As the ice melts, it creates a kind of anticipation and tension that isn’t there right at the beginning or in the residue after it has fully melted. 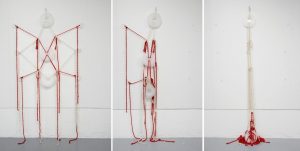 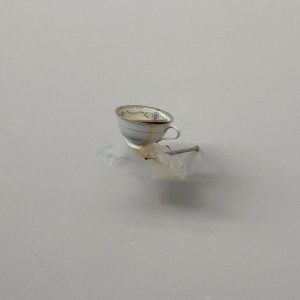 How do you feel about the scattered-ness that happens in grad school and the push for exploration and iteration?

I’m getting better at dealing with it, I think. I was feeling really crazy earlier this year, when school first started. I definitely feel like I have a million and one things to do in basically zero time, every day of every week, but that might also just be what it means to be a person, not just a grad student. I like the push for exploration a lot—it’s one thing I really wanted going into the program. I don’t like the scattered-ness, because I like things to be orderly and make sense, so that’s been really frustrating. I think maybe I feel like I’m gradually losing my mind, but also becoming okay with it….? Overall, it’s a good thing though. 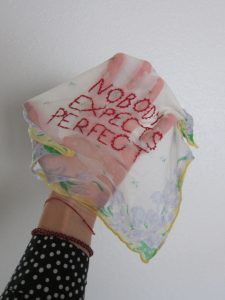 Lena Klett is a featured artist in SDA’s Shifting Landscapes exhibition at form & concept gallery, on display through June 10th, 2017.

To see more of Lena’s work, go to http://lena-klett.squarespace.com