This month’s SDA Book Club features of review of Crafting Dissent: Handicraft as Protest from the American revolution to the Pussyhats edited by Hinda Mandell and reviewed by Faith Hagenhofer. This is the second in Faith’s book reviews, and we’re very excited to have her continue to contribute to our monthly book club!

Crafting Dissent: Handicraft as Protest from the American revolution to the Pussyhats edited by Hinda Mandell 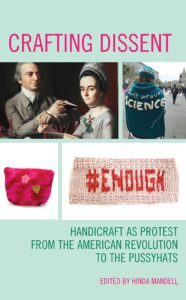 What a box of treasures Hinda Mandell’s 2019 collection is! It is seriously located in this American political moment, particularly in the way historic collective textile activities have made their use both accessible and exceptional in the post Trump election time frame. The dissent, which serves as a basis for looking at a wide array and groups of public textile items, is clearly from the Left. The examined textiles and fiber crafted objects are often sartorial. Likewise they are entirely inexpert in their making—not without some skill, but not construed, designed or perceived as Art. This is not a discussion of the merits or relationship between art and craft; rather the crafted items are elements in public debate, their makers members of the public first and foremost. Historically, and up to the present, the skills, methods and materials- Yarn, thread, scissors and Fabric- are here cataloged in their use for community, not self or singular expression, the making utterly accessible to non-experts.

Focusing on Craftivism there are essays by both Betsy Greer and Sarah Corbett, who are separately credited with coining the term and giving name to particular kinds of activist oriented handwork. There are essays by initiators of Pussyhats for the 2017 “Women’s March”, who have continued to use mass craftwork for social good by developing the Welcome Blanket project, which is both aid for immigrants and protest of current US policies. And there are cultural historic critiques of the work of pussyhat making and wearing and the long-running Clothesline project, in which the T-Shirts exemplify the dirty laundry of domestic violence. I was very gratified to read this essay, as I think that work had less publicity than it deserved. Mary Worrall and Shirley Wajda’s excellent essay on context for the cultural artifacts and residue dissent craftivism produces looks at museum collecting, curating and showing. This is no small thing. It means that the objects and the opinions they represent, and the work of many many, mostly female activists will not disappear.

Suzanne Schmidt has written about the Social Justice Sewing Academy, of which she is the Education Director. The thrust of her essay gives a good lens through which to look both back and ahead to future craftivist activities. She asks “What are the possibilities of craft as a means to cultivate critical hope rather than simply express resistance.?” The makers among us would do well to keep this question in mind. Finally, as one essayist, Donna Druchanas writes “Do stitches speak louder than words?” If these essays are anything to go by, and cumulatively I think they are, the answer is Yes, absolutely !!!

–Faith Hagenhofer, is a fiber artist, shepherd, retired librarian, and has been involved with Surface Design Association for more than a dozen years She serves as the South Puget Sound (Washington, US) SDA contact.

If you’ve read this book, leave a comment and let us know what you think!

Do you have a recommendation for a recent fiber-related book you think should be included in SDA’s Book Club? Email SDA’s Managing Editor, Lauren Sinner, to let her know!