Early on a summer Sunday morning, as I prepared to write this piece, an urgent call came from my neighbor. The sheep we’d put in her hay field to grass, had escaped. Suddenly, I’d not only read James Rebanks’ paean to English sheep farming, but I was living it. An hour later, I’m thinking not only about the similarities, but now also the differences in our sheep farming realities. Originally published in England, English Pastoral: An Inheritance, seems like a truer title. Rebanks’ experiences as a farmer, shepherd and land steward are situated within both historical and contemporary English culture, politics and ecology. 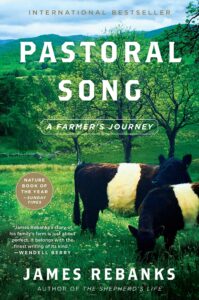 In Pastoral Song we find an idyll to the old ways in the rugged valleys and fells of the Lakes District. It is indeed a pastoral memoir, grounded as these practices are in multi-generational land stewardship, management and occasionally ownership. We learn of Rebanks’ grandfather and father, both shepherds/farmers on this same land, their years of hand-work and the deep seated knowledge that comes from it. According to the British Sheep and Wool Book, published by the British Wool Marketing Board, Hedrwick sheep were established in the UK in the 12th century and practically co-evolved with this location. In Rebanks’ compelling account, he situates his myriad decisions in a broader telling of the long history of the British and their sheep, grounding his life journey to his current husbandry practices. The writing moves between personal place-based intimacy and an exploration of farming traditions, and the wider contexts and implications of a world that works, struggles economically and has ideas about the meaning of progress. It offered me an eye-opening opportunity for comparison between English sheep farming practices and those in the US.

In the US, we have a few hundred years of sheep raising experience often on fenceless land illegitimately wrested from indigenous people. The sheep that are associated with Native Americans, the Navajo-Churro, were bred from Spanish conquistadors in the 16th century.

My own experience growing pasture and raising sheep came from being a city raised felt-maker. This led to interests in sustainable fashion, wool as a commodity, and a curiosity about sheep the world over. I’ve been fortunate to have the opportunity to review other books related to working with wool and sheep, notably Fibershed, (Rebecca Burgess) which addresses, problems and opportunities around wool as a viable textile material for the US, and Raw Material (Stephany Wilkes), a deep look at the life of a contemporary sheep shearer. Clearly we’re working on similar issues in the US, though in somewhat different ways than an English farmer might. However, like Rebanks, I have fencing to keep in order, pasture and soil ecology to manage, and sheep health to consider.

What the US lacks, and agrarian farmer-writers like Wendell Berry urge, is reinvigoration of our communities. Rebanks echoes this sentiment. In his experience, the health of communities is a vital underpinning of systems that are tasked with feeding and clothing the world for the long term, and shepherds/farmers have important roles therein. Without this social capital, built on mutual aid, all the scientific innovations that offer short-term monetary returns won’t be enough. Rebanks is making a case for the tradition-informed farmer’s place in saving the natural world. His own words say it best:

“The truth is, a farm swallows you up, takes everything you have and then asks for more. It is also an exercise in humility: you can’t do it alone. The biggest lesson I have learned is that the whole idea of the heroic individual ‘farmer’ is a bit of a macho-male myth. It takes a village to make a good farm work.”

If you’ve read this book, leave a comment and let us know what you think!

Do you have a recommendation for a recent fiber-related book you think should be included in SDA’s Book Club? Email SDA’s Managing Editor, Lauren Sinner, to let her know!