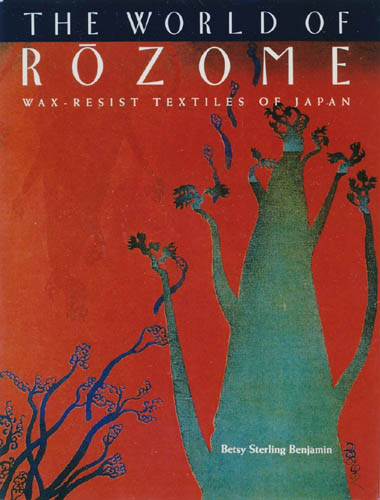 The World of Rozome: Wax Resist Textiles of Japan, by Betsy Sterling Benjamin, was first published in print in 1996. It continues to be the seminal resource for those interested in Japanese “batik”, textile history and clear information on the highly-developed wax resist and dyeing techniques of Japan. Used by artists, Japan-ophiles and university textile arts programs across the US and Canada as a text and resource, it was re-issued as a convenient CD in 2010. 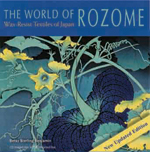 The CD format gave an opportunity to update information and add 2 new chapters. The first, Rozome in the New Millennium, both visits the masters and introduces some talented young Japanese artists exploring this medium. The second, Rozome and the New Soy Wax, looks at the use of ‘washable’ soy wax as the resist material for executing these refined Japanese waxing techniques.

The book has been wonderful success, but on-going requests by artists and students for more information about process has lead to the introduction of a series of instructional videos. They capture – for repeated viewing – the many intriguing rozome techniques as if this accomplished teacher had been invited right into your studio to demonstrate them for you personally. 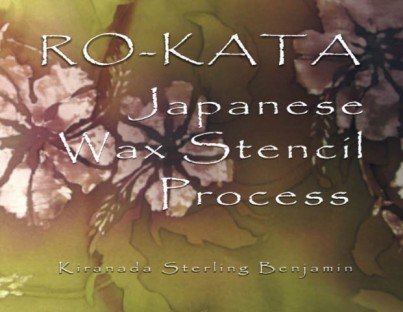 In the new DVD, Benjamin (now Kiranada Sterling Benjamin) illuminates an area of wax-stenciling that she has been exploring in her own work for the past 25 years. Ro-Kata: Japanese Wax Stencil Process was released in late 2011 and has been hailed as “an extraordinary and complete course in one 53 minute disc”. A brief historical section covers the arrival of this stamping & stenciling resist process in 8th century Japan and its evolution into a contemporary art form that could become a flexible alternative to traditional tjaps or metal stamps.

With her deep love of teaching, Benjamin takes you through stencil designing in 4 different styles, the stencil cutting itself and then wax application. Also included are segments on dyeing the image using layered application, steaming to set dyes and finishing for permanency.

This is a great technique for both single-image art or as a unique background pattern for fashion.

Benjamin’s personal work with ro-kata includes its use on kimono, obi, and fashion apparel as well as on scrolls, standing screens and wall hangings.

The World of Rozome CD along with the new Ro-Kata DVD can be ordered by clicking on “Books, DVDs” at www.betsysterlingbenjamin.com.

Dh. Kiranada (formerly Betsy Sterling Benjamin) is an acknowledged master of the Japanese rozome wax-resist technique with over 40 years of experience creating resist-dyed textiles. Author of The World of Rozome: Wax Resist Textiles of Japan, she has exhibited her work in more than 50 shows world-wide with solo exhibitions in Costa Rica, Germany, England, Japan, Indonesia and USA. 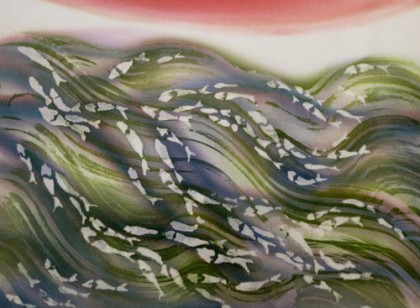 Kiranada maintains a working studio, teaches surface design at Massachusetts College of Art and Design (Boston), lectures internationally and leads workshops in the USA and abroad. She was ordained in the Triratna Buddhist Order in 2009.

View more of her work at www.betsysterlingbenjamin.com