Jason Pollen’s Ancestors/Descendants show at The Robert Hillestad Textiles Gallery at the University of Nebraska-Lincoln showcases his most recent body of work. Pollen, an established presence in the fiber arts world (and SDA’s President Emeritus) has been anything but retired since he left his role as the chair of the fiber department at the Kansas City Art Institute in 2010. He conducts several workshops a year, in the United States and abroad, and continues to produce and show elegant fiber art. 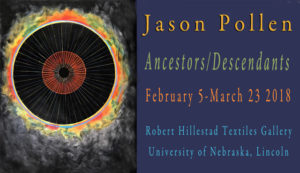 A selection from Bach’s Cello Suites sets the tone for visitors to Ancestors/Descendants. Through a video screen, Pollen narrates behind-the-scenes glimpses of his workshop, process, and inspirations. We see his garden, where he points out a set of antique iron elevator doors used as a trellis. He explains, “It has structure but openness.” This theme relates directly to a group of some of some of Pollen’s newest work, The Outliers. The Outlier series is a collection of free hanging mixed media orbs within orbs. This galaxy of 6 suspended multi-dimensional mobiles is made of laser cut plywood.

Pollen notes that, “The term ‘outliers’ refers to persons or things that function outside a main group or system. Outer planets, hermits and many artists are often referred to this way.” 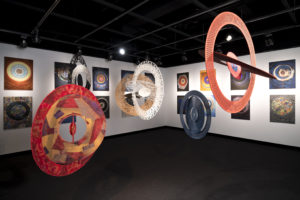 The use of wood in Outliers echoes back to Pollen’s fiber art roots. Two examples from Pollen’s first foray into fibers are displayed in this show. The Ancestors series consist of wooden sticks attached in an orderly procession on unprimed canvas. Wire, screen, bright flashes of silk and pigment accent the wood and bare canvas. Pollen started this series in 1966. Living in Paris as a young artist, he couldn’t afford the paint to create large works on canvas. During walks, he began to gather small twigs and tying them onto canvas. This “eureka” moment, as Pollen describes it, opened his mind to the use of alternative materials in his artwork. He revisited this approach in 2014 using twigs he saved from Paris and stored for over 40 years, together with newly harvested twigs from his Kansas City garden. 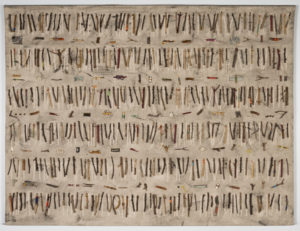 In the gallery, you can’t help but notice the series of mobiles that are part of Pollen’s Descendents series. These ceiling-to-floor mobiles flutter as you walk by them, rotating around their axes and responding to the slightest movement or change in the air.

Pollen’s inspiration here comes from the flickering movement of aspen leaves, Alexander Calder’s mobiles, and fabric drying on clotheslines. “After working for decades on pieces that use the wall as a support, I became enthralled by the dance-like motion and shifting shadows produced by linked collages, suspended from the ceiling.” Delicate wires and thread suspend these small individual collages. A close look rewards the viewer with some whimsy: doodles on Post-it Notes and pages salvaged from an encyclopedia are caught up in the gentle whirlwind of jewel-toned silks and precise stitches. 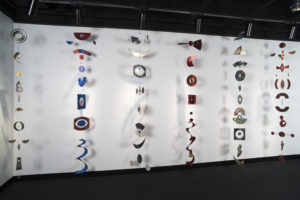 Pollen repurposed discarded fabric “leftovers” into many of the pieces in this show. The Spanner series are the newest of the exhibited works. These works explore the tension and tensile strength of threads stretched over a void. As the multitudes of fibers intersect and interlace, they create unexpected color relationships and reveal smaller and larger translucent geometric shapes. Webs of vibrant fibers make a sort of visual music, through rhythm, shape, color and texture. 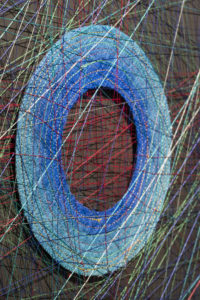 Saving the best for last, Pollen’s Portals series steals the show. He began working on these the day of the 2017 solar eclipse and completed the last one a day before the show opened on February 2nd. The dimensions and the circle are the constants, and the surface treatments and spirit are the variables. Pollen says, “The word portal suggests a gateway into and out of physical places and shifting states of mind. Doorways, mirrors, internet sites, cell membranes, and black holes, come to mind.” 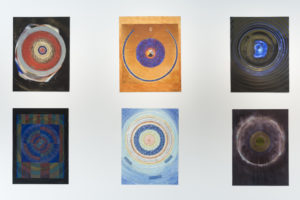 I found Pollen’s work in this show to be incredibly moving. I visited the exhibit once on opening night, when the gallery was full of people, and the jeweled tones of silk caught the light like a cozy flicker of a flame. I visited again on a snowy afternoon, and had the show all to myself. I know that Pollen’s work is influenced by childhood and the exuberance of play, and I can see that in the way that these pieces move, react, and reward the visitor who looks at them long enough. To me, these new works seem to function on an even deeper level. They feel like lush meditations on our space in the universe.

Like the unaccompanied cello in the Bach Cello Suite, Pollen’s solo work is evocative and powerful.

Ancestors/Descendants is at the Robert Hillestad Textiles Gallery until March 23, 2018. The gallery is located on the second floor of the Home Economics Building at the University of Nebraska-Lincoln. The Hillestad Gallery is open 8:30 a.m. to 4 p.m. Monday through Friday and by appointment. Admission is free. Guest parking is available near the Home Economics Building and in metered stalls in the Nebraska East Union lot. For more information, click here or call 402-472-2911.