At first blush, Thomas Roach, appears to be a man of contradictions. He was raised on the plains and lives by the sea; he studied the solid earth and is devoted to the divine; he loves theatre and works in textiles; and is a solitary person committed to community. These contradictions make him an interesting man and a thoughtful, introspective artist. Roach was raised in Calgary, Alberta, Canada, where the prairie meets the Canadian Rocky Mountains, by parents whose connection to the Anglican Episcopal Church was foundational to life and the daily rhythm of the family. His mother believed his future was in the sciences and guided attention in that direction, leading him to pursue a degree in geology. 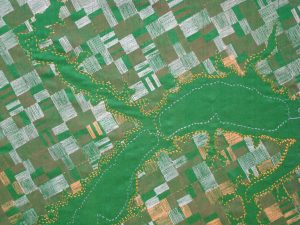 One summer during graduate school, Roach took a job field mapping at the Arctic Circle. It was there he realized studying the earth was compelling but he was not destined to be a researcher, nor did he feel at home in the geology world. While Roach felt defeated, he also felt liberated from this expectation and could now come back to the arts that had always fed his soul. 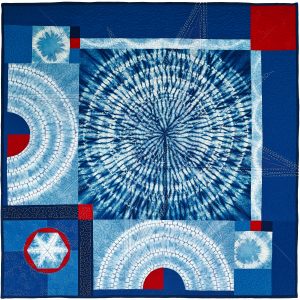 Unintentionally it would seem, his mother influenced the artistic aspect of his life as well. Roach described a home beautifully appointed with suburban 1970s Scandinavian furniture and art prints reflecting his mother’s aesthetic. The family was immersed in the arts—they went to art galleries, the theatre, and enjoyed CBC productions of Gilbert and Sullivan on television. However, she never acknowledged this aspect of herself or encouraged her children to pursue the arts as a vocation. 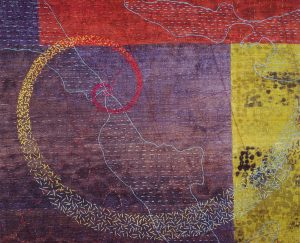 As a child, Roach was drawn to cloth and learned to make puppets as a Cub Scout with his mother’s old sewing machine. He enjoyed the hand of the cloth; its versatility and flexibility. He was self-conscious about his drawing skills and found cloth more forgiving of mistakes often suggesting its own thing. His interest in both the theater and textile arts as a means of self-expression, began in earnest during adolescence. He learned to paint on silk and to create sets and banners for church plays.

This sustained him through college and graduate school as it also created a built-in community. He came out during this time and found a home in a queer theatre company and exhibited for the first time in a Gay and Lesbian community art show. Recently, Roach said, “Arts provide both shelter and encouragement of self expression (and even a certain amount of disruption).” 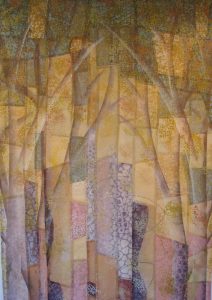 After completing his graduate work in geophysics at Queen’s University, Roach was employed by the Grand Theatre, a city-owned theater company in Kingston, Ontario where he worked as an administrator until moving to Vancouver, British Columbia. There he reconnected to cloth at the Christ Church Anglican Cathedral where the Church has a long-held inclusive and textile tradition. In 1997, Roach was commissioned to create a set of blue advent vestments. The success of this project led him to follow his heart and, in 2000, he earned a textile arts diploma and graduated with distinction from Capliano University in North Vancouver, British Columbia. 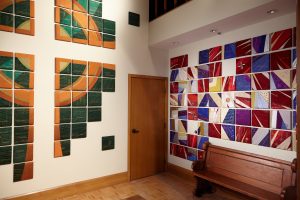 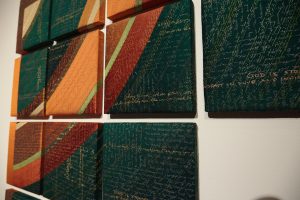 Roach remains connected to geology as it reflects the divine in nature and the wonder of creation. He is particularly interested in the Celtic notion of thin spaces. As the Celtic saying goes, “Heaven and Earth are only three feet apart, but in the thin spaces that distance is shorter.” For Roach this is a moment where the veil separating the physical world and the divine is lifted “and suddenly the light shifts.” In his work, he conveys this using cotton organdy and silk organza to capture that shift and the sense of there being something more. 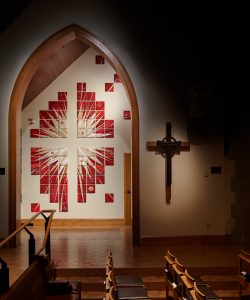 He demonstrates his commitment to God and to textiles though his community work. Roach is a skilled community leader who has shepherded several community projects meant to enhance the Cathedral space. One such project was a 2016 proposal to create 230 10” x 10” textile panels on cradled board wherein the connection between meditative prayer and hand stitching was featured. Roach invited community members to write a favorite prayer in their own hand. These were translated as silk screens, printed on plain silk, and embellished with hand stitch. Then the prayer pieces were mounted within each of the completed panels—“hidden from sight, but known to God.” 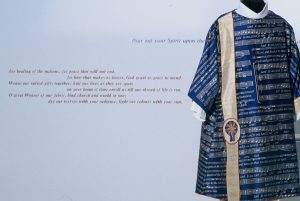 Thomas Roach Take our Fear Away (installation view) 2002, one of three 1997 vestments used as part of an installation in Boys with Needles at Museum London, ON.

Currently, Roach is working on two series simultaneously. One involves shibori and the other explores the use of breakdown printing with natural dyes and Bojagi-inspired piecing. In accordance with his commitment to community service, he is also the new area representative for British Columbia and the Yukon for SDA.

Thomas Roach has stitched together seemingly unrelated life experiences to create an integrated life in the Church and in the textile world. His art reflects this journey and connects him to many parishioners who have found, in themselves, a connection to God through textiles. 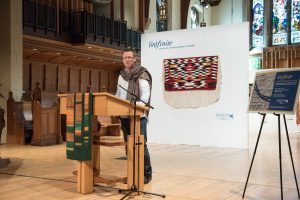 (in)finite: spiritual conversations in cloth exhibition manager Thomas Roach speaking at the opening reception at Christ Church Cathedral, Vancouver on May 25, 2017. Debra Sparrow’s Chief’s Blanket is on the entrance wall behind.