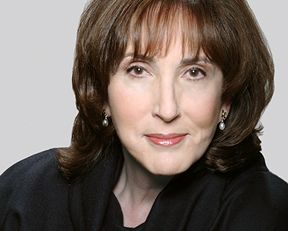 Susan Etcoff Fraerman has always collected odd things and has always liked a good story. She discovered her creative voice at the early age of nine as an actor with the Boston Children’s Theatre. She went on to receive a B.F.A. in theater from Boston University’s College of Fine Arts, taught drama in the public school system for a number of years, and later, when funding for the arts was reduced, she entered the business world.

After retirement, Susan looked for a new avenue for creative self-expression. A jewelry-making class, in which she used the many beads gathered in her travels, introduced her to the word of tiny and beautiful woven seed beads. As she learned the techniques of off-loom bead weaving, she soon realized the potential of using beadwork to convey a narrative. A 1997 workshop in fiber at the Haystack Mountain School of Crafts in Deer Isle, Maine, was an awakening; she began to view herself seriously as an artist: “I realized where I was and where I could be.” As she has advanced in her artistic career, she has found that narrative beadwork “satisfies my creative impulse through many of the same devices and materials used in the theater.”

Susan’s work often begins with a found object—a shoe last, a mannequin hand, an old ammunition box—that becomes part of the stage set she assembles to draw the viewer in. While traditional beading is the springboard of her work, she has “reinterpreted classic African and Native American stitches in a new way, both technically and thematically.” Her free form interpretation of the classic right angle weave stitch allows her to create a fabric of beads: “I work intuitively, without loom, pattern, or graph.” 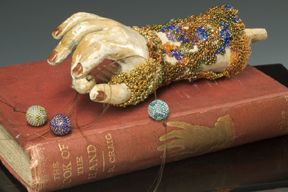 As she works, she finds that the repetitive rhythm of the stitch and the beauty of the beads are soothing. When the work is finished, the shiny and reflective beaded elements entice the audience to come closer and hear the story. In her art, as in acting, she finds there is catharsis for both the artist and the audience through the expression of emotion: “My work often speaks of contemporary issues that have touched me deeply: children in need, mutability of the body, the vicissitudes of life.”In Cassandra, a hand rests on an antique book of palmistry as delicate fingers control three beads, “symbols of the past, the present, and the future.” 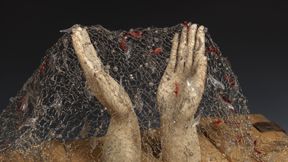 Over time, she has found that she often uses the assemblage of found objects to create her stage set, as in Return To Home, in which a circa-1937 German ammunition box is the stage, the beaded wire veil a metaphorical curtain, and the found hands “stand in for the players: the mothers, the fathers, the wives and children left behind” by young men and women who have gone off to war and returned to “lives inexorably changed by loss of limb.” Return To Home is part of a unique juried art exhibition, which opened in March 2010 in New Orleans, sponsored by The American Academy of Orthopaedic Surgeons to honor the impact war injuries have on the lives of those injured, their families, and the doctors who treat them. 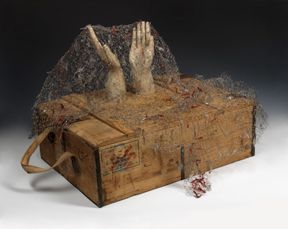 Born in Portland, ME, raised in Brookline, MA, and now living in Highland Park, IL, Susan has had work exhibited in various venues including SOFA Chicago; The Snyderman Gallery, Philadelphia; Woman Made Gallery, Chicago; Bead International, The Dairy Barn, Fiber Art International, Pittsburgh; Materials Hard & Soft, Denton, Texas; The Northern Illinois University Art Museum, DeKalb; and recently at The Fuller Craft Museum, Brockton, Massachusetts. It has been included in numerous publications and reviewed in many magazines, including Surface Design Journal, Spring 2005 and Summer 2003. Off the Grid was Susan’s first SDA conference and she found the talent there “inspirational.” She has given lectures and slide presentations about her creative process to many organizations including The American Academy of Orthopaedic Surgeons at the 75th Anniversary Annual Meeting in March 2008 and for the Affiliates of The Museum of Contemporary Art in Chicago. Susan’s training in the theater makes her an engaging presenter. 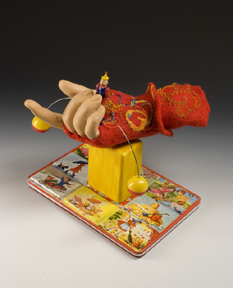 To see more of Susan’s work, visit her website: www.thebeadedobject.com

Rachel B. Cochran is a fiber artist and freelance writer/editor from Montclair, NJ. Her work has been both juried and invited into regional, national, and international exhibitions and she is editor/co-author of New Jersey Quilts 1777 to 1950: Contributions to an American Tradition.