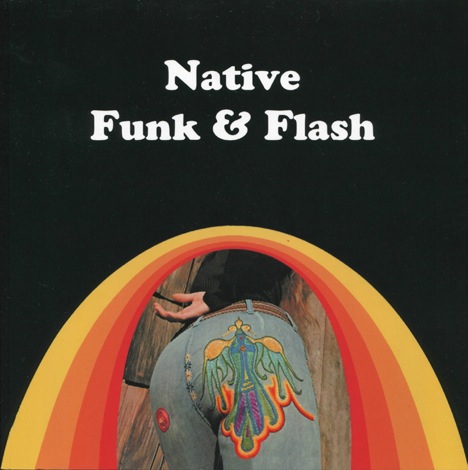 40 years ago I was just beginning to work on the original version of Native Funk & Flash.

I had no idea it was to become iconic to my generation of counter-culturists – let alone go beyond that to inspire generations of crafters and designers yet to come.

At that time I looked about and saw wildly fascinating and newly conceived personal décor springing up all around me, especially in the things people were wearing.

I asked my dear friend Jerry Wainwright if it might not be a good idea for him to do a photo book on the favorite rock ’n roll artists of the times, as he was doing album photos and rock poster shots and surely ran into fabulously executed outfits. He shot back that I probably ran into more than he did because I had an eye for it and did that sort of thing myself. 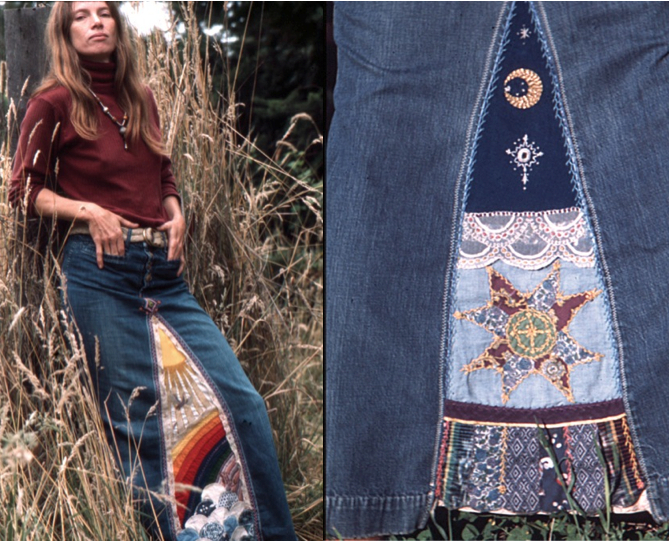 Aha! The book immediately became inevitable: he as photographer, I as writer – and the 2 of us as a team.

Upon its publication in 1974, it sold like hotcakes, exciting more people to ply their ideas whether they knew how to go about it or not. The title came from the range of artistic abilities. Some artists had never put a needle to fabric before; their stitches were crude but carried a passionate energy: FUNK. 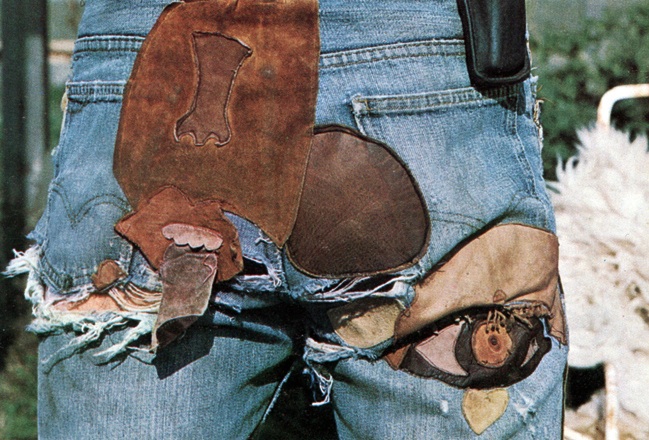 Others, masters of their art, were practiced and slick but equally outrageous in their end product: FLASH. 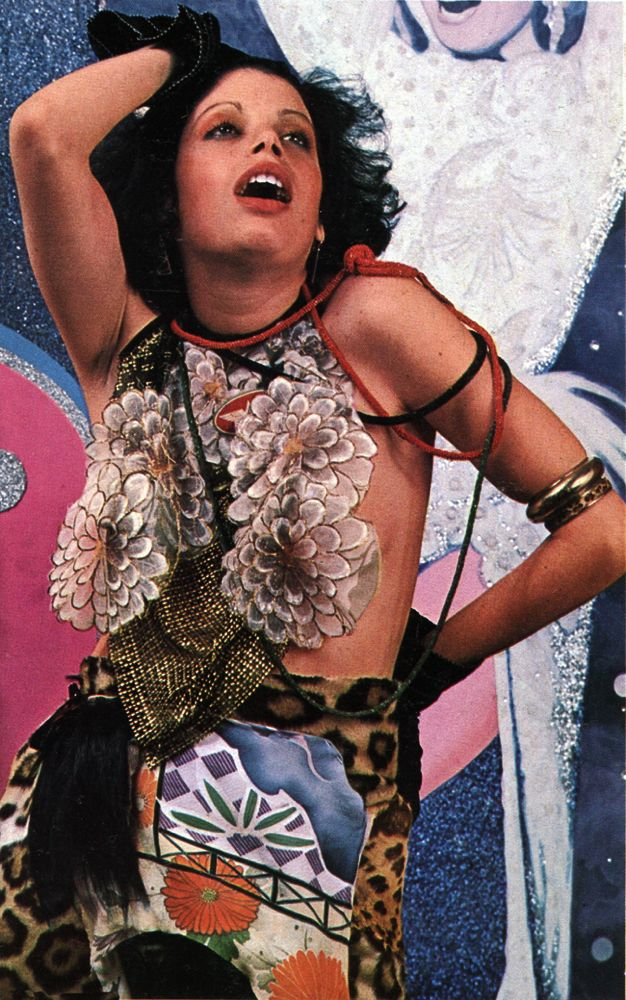 It was all fresh, personal and totally innovative, springing from the early ’70s Bay Area aesthetic: NATIVE. 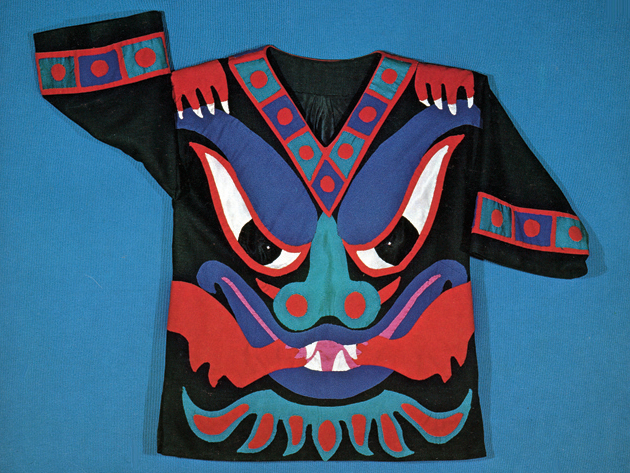 In 2002, the Nicolas Ghesquiere/Balenciaga flap about Kaisik Wong’s vest being plagiarized (and passed off as Ghesquiere’s own) sparked thoughts of a new edition, which almost came to pass. 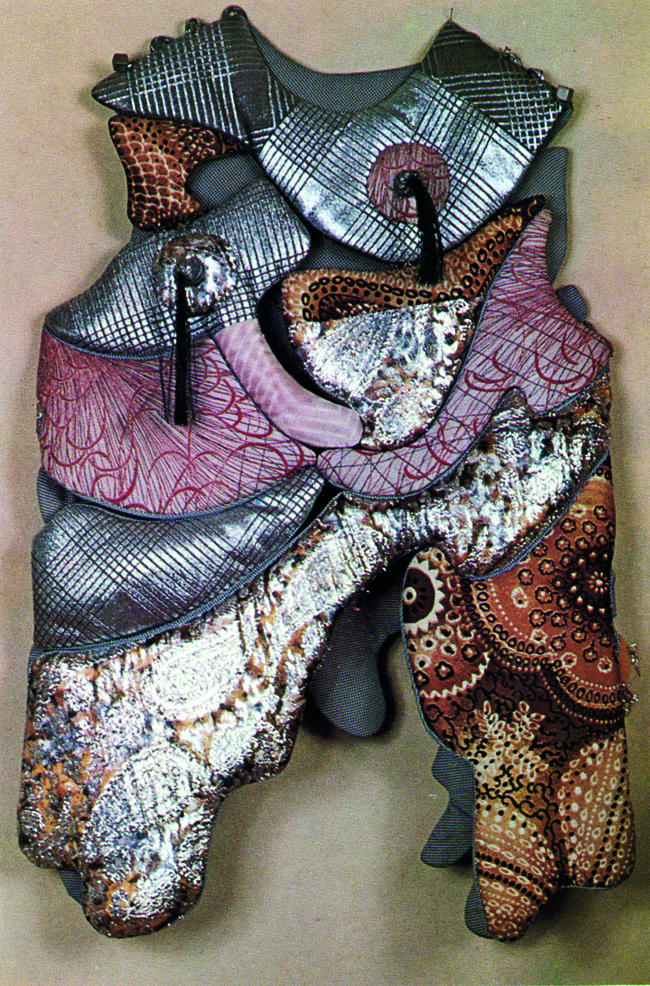 Then, as the ’60s – ’70s aesthetic began to creep back into fashion and public interest after 2010, I began to be approached by younger artists who had based careers on early encounters with the book. Some, like Michael Cepress (Surface Design Journal Summer 2013 Gender issue, pp. 12-17), had not even been conceived in 1974. Imagine my surprise to open my SDJ issue and find Alex & Lee looking back at me! 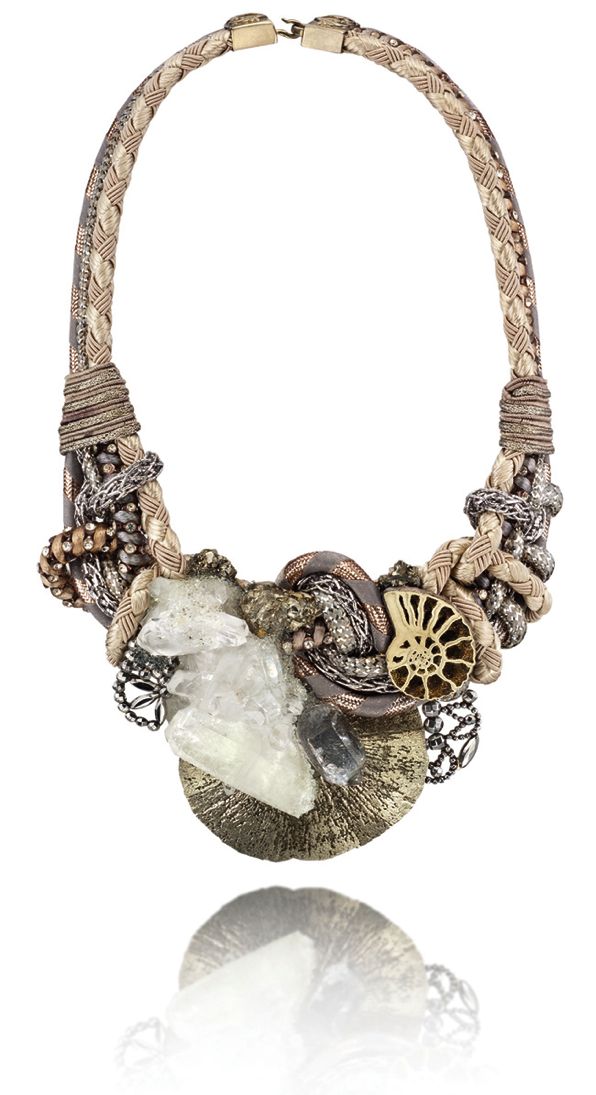 In 2012 Michael invited me to visit the Counter-Couture class he was teaching under the aegis of the History Department at University of Washington (Seattle), using Native Funk & Flash as his textbook. There I found all these fresh young folks finding new inspiration from the times and the imagery. The time for the 3rd edition seemed ripe.

The book launch was June (2013), hand-in-hand with my retrospective exhibit, Fiber, Folkwear and Funk & Flash: Fifty Years of Fiber with Alexandra Jacopetti Hart (at Occidental Center for the Arts, CA), thus tying all together my career in woven tapestries for corporate installations, my Folkwear years creating handwork designs and instructions and my embroidered folk art. 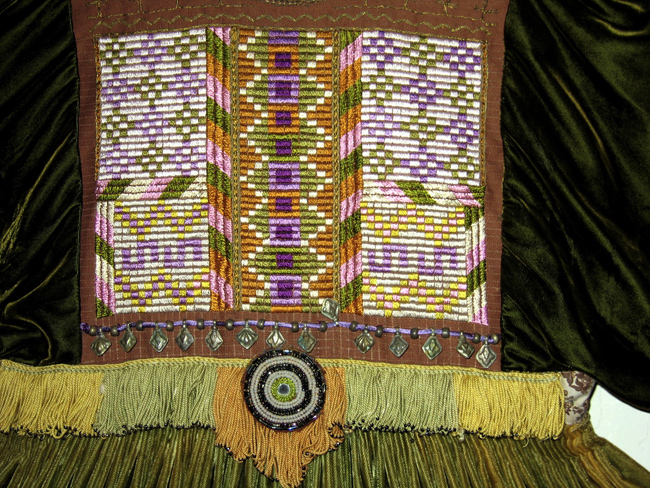 What seems to be the common thread is that the human spirit is unquenchable when it comes to self-expression. You see that someone can create wonders from almost nothing and you begin to believe that YOU can do it, too. And so you can.

“Inspiration” was the word I heard most often from retrospective visitors, sharing that all the work was “museum quality.” Many of them said they were going straight home to dig out their old embroidery threads. 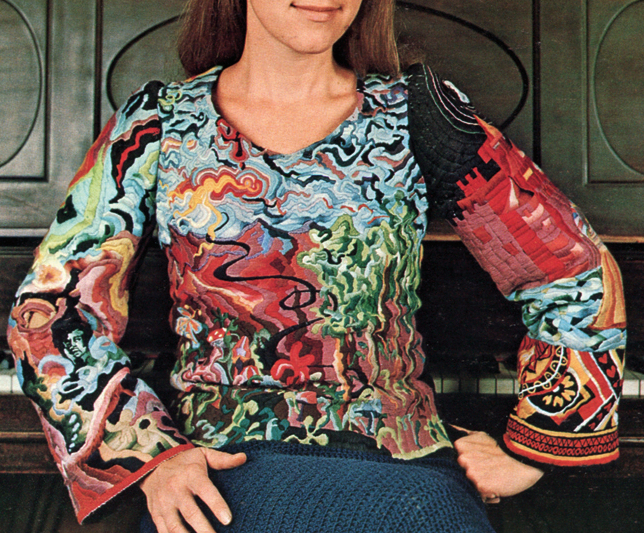 It’s interesting that the folk art in this book is what got my work into museums. Oakland Museum has collected (in addition to several other items from Funk & Flash) the cover Phoenix Jeans and the Hero Shirt and subsequently shown them in permanent displays and lent them to museums around the world, including major exhibitions in Paris and San Francisco. 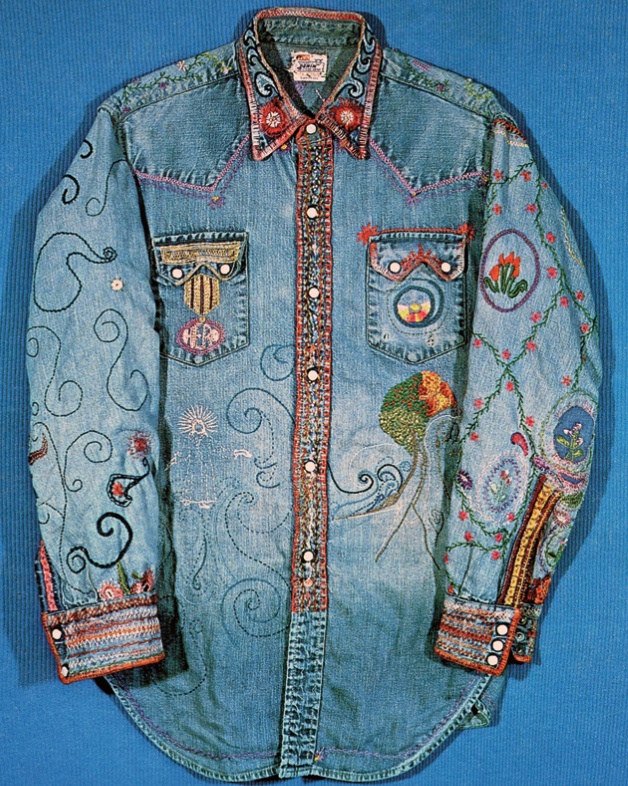 The new edition has 190 full color photos and an additional 12 new pages of both text and images. I’ve been told the text is even better than the photos, though most folks don’t get around to reading it for a while. 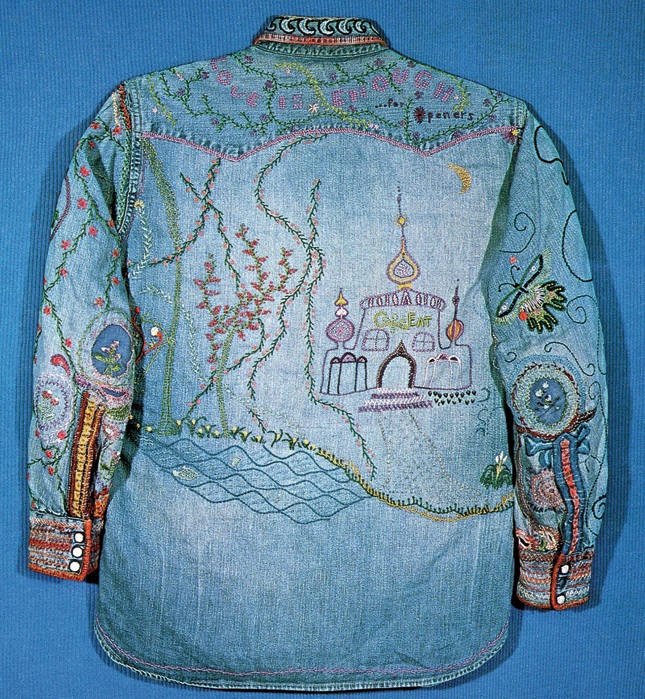 As for future work, I’m fascinated by what we survivors of the Bay Area counterculture days might still have to offer as an elder culture. I am exploring it even though osteoarthritis makes handwork increasingly difficult. 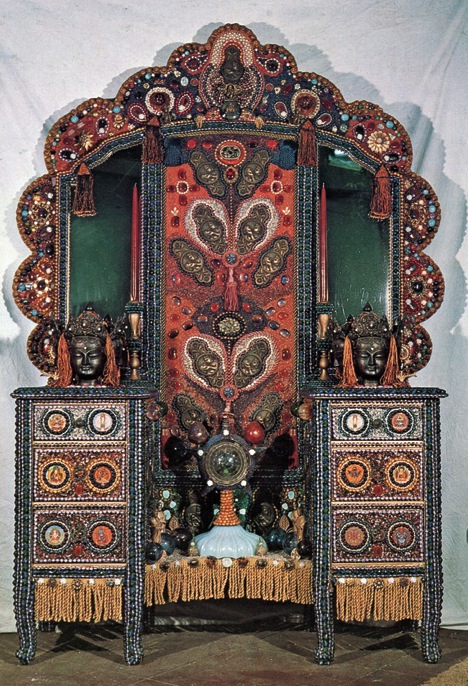 Visit the book website for more photos, more about the book and my blog of reflections on how I came to take this path at www.nativefunkandflash.com.

Copies can be purchased online at Amazon.com (through SDA portal that gives back, here) or at Barnes & Noble in soft cover or eBook.

Booksellers can get discount and return info by writing channelsales@authorsolutions.com

Alexandra Jacopetti Hart (an SDA member and supporter) has been working in the field of textile arts for 50 years.

Since Native Funk & Flash was first published in 1974 she has continued a career in fine art tapestry while concurrently creating Folkwear Patterns, an ethnic and vintage clothing pattern company, with 2 partners. At Folkwear she was the traditional design researcher and instruction writer, working the handwork samples and proving the surface design patterns. Both of these endeavors resulted in traveling exhibitions throughout the western United States.